Careful analysis of neural data begins with a thorough understanding of the raw data that is saved by the data acquisition system (usually referred to here as “Neuralynx” or “Cheetah”). However, raw data is only rarely suitable for immediate analysis. At a minimum, freshly acquired data sets must be annotated and the files systematically renamed – for instance, with the ID of the experimental subject and some information about recording locations – so that the analyst can select which files to analyze. More complex pre-processing steps inlcude spike sorting, the process of assigning spike waveforms to putative single neurons to obtain their spike times.

The R042-2013-08-18 folder you obtained in the previous module contains data from a single recording session that has been pre-processed so that it is ready for analysis. Such a pre-processed data set is referred to as “promoted”; raw data that has just been recorded is “incoming”, data being pre-processed is “inProcess”. The schematic below gives an overview of the major data files and their transformation during pre-processing:

A critical part of any data set is the following:

Finally, there is also:

Both of these files are generated by a MATLAB script (CreateCQFile.m) or directly from MClust version 4.1 or higher.

Notice how each file is named: all start with R042-2013-08-18 followed by a suffix indicating the file type and (if necessary) an identifier. Applying this naming scheme consistently is a key part of good data management because it enables provenance tracking – which cells from what animal, what sesssion, and what condition are contributing to each plot, what cluster did it come from, et cetera. The rename steps in the above schematic are a critical first step.

Before we can proceed to the nice wrapped loading functions, you first need to understand the three main data types used for neural data analysis; this is necessary because the loaders return their data in these formats.

A data type is the computer science term for a standardized format of representing data. Classical data types include things like integers and floating-point numbers, but our data types of interest are essentially all MATLAB structs with particular constraints on field names and formats.

(Note for the connoisseurs: the choice to not implement these data types as MATLAB objects is deliberate.)

Time-varying signals, such as extracellular potentials recorded by an intracranial electrode, or position data recorded by an overhead camera, are very common in (neuro)science. Such signals are acquired through sampling, that is, a data point is acquired at some specific time, and then some time later, another point, and so on (the idea of sampling and some consequences are explored in detail in Module 3). The result of this is that instead of a truly continuous signal, we have instead a set of points, each with a timestamp and a value: 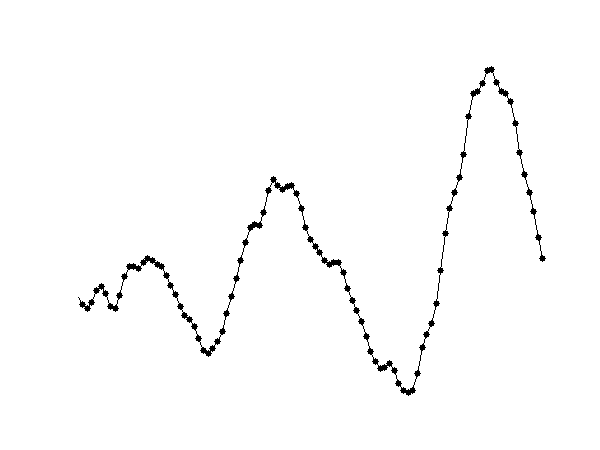 Thus, what we need to fully describe such a signal is two arrays of the same length: one with the timestamps and the other with the values. This is exactly what the timestamped data (TSD) data type is, as illustrated by the LoadCSC() function:

The TSD data type has the following fields:

In the above example, we only loaded one .Ncs file and therefore there is only one label. To plot this data you can simply do plot(csc.tvec,csc.data).

A different data type is needed to describe sets of punctate events (a point process in statistics), such as times of action potentials (spikes) or task events such as reward delivery times. For this we use the TS (timestamp) data type, defined as follows:

An example is provided by the event loader LoadEvents():

Because we did not specify a specific configuration, LoadEvents just gives us the times of all EventStrings by default; these have become the entries in the label field.

Interval data – matched sets of start and end times – is not loaded directly from promoted data files. However, it commonly comes up during analysis, for instance when defining trials, running vs. resting epochs, sharp wave-ripple complexes, et cetera.

Interval data is defined as follows:

Some common ways of creating an iv object from scratch are the following:

You have already seen examples of TSD and TS data types returned by some loading functions. The full set follows below. You will notice that each loading function takes in a cfg (“configuration”) variable, which is used to specify parameters and options such as the filenames to be loaded. This use of cfg variables is shared by many other vandermeerlab data analysis functions, and is highly encouraged when you start writing your own code. For a full description and rationale, see here; in brief, it forces well-organized code and enables provenance tracking, two principles of good programming practice.

☛ The code blocks that follow below are examples to illustrate usage of the loading functions. Feel free to try them out, but you don't need to execute these code blocks in order to proceed.

This loads raw Neuralynx position data (*.nvt). (In your data folder, this raw file is in a .zip archive by default.) If no filename is specified in the input cfg, LoadPos() checks if a single .Nvt file is found in the current directory and loads that one:

Because the .Nvt files are large, it is often convenient to save this posdata variable as a .mat file. This should be named Rxxx-yyyy-mm-dd-vt.mat; from now on in this tutorial, you can simply use the already provided, previously saved file.

Note that the data field now has dimensionality [2 x nSamples]; this is because there is both x and y data as indicated by the label field. So, if you wanted to plot x against y, you could do plot(posdata.data(1,:),posdata.data(2,:),'.');, but a more general approach that doesn't require knowing which variable is which dimension is plot(getd(posdata,'x'),getd(posdata,'y'));.

To load .Ncs files with LFPs:

This gives the following TSD:

Note that the format is the same as for the position data above; this is because both LoadPos() and LoadCSC() return TSDs.

LoadCSC() outputs some information about the files being loaded; in particular the number of “bad blocks”, which if they occur indicates a problem with the recording system that should be fixed!

By default, LoadEvents() returns a TS with the labels and timestamps of all unique strings found in the EventStrings of the raw events data:

evt.label(:) will reveal a list of cryptic event descriptions. However, by using the cfg file, we can get something more sensible:

By specifying which EventString is associated with which human-readable event ('FoodDelivery','WaterDelivery') we now have a more user-friendly events variable.

By default, LoadSpikes() attempts to read the .clusters file generated by MClust to obtain cluster ratings. This can be overridden by specifying cfg.useClustersFile = 0;. If you wish to load *._t files, do cfg.load_questionable_cells = 1;.

Let's combine the loaders above with a simple visualization.

☛ From now on, you should execute the code blocks provided. The best way to do this is to create a sandbox.m file, create a new Cell for each block, paste the code into it, and hit Ctrl+Enter.

The restrict() function restricts the data to the given start and end times. In this case, we are restricting the data to the times the rat was actually performing the task, specified in the ExpKeys. This excludes the baseline recording blocks taken at the beginning and end of each recording session.

If the above executes, you can now plot a raster of the spikes, along with the LFP: 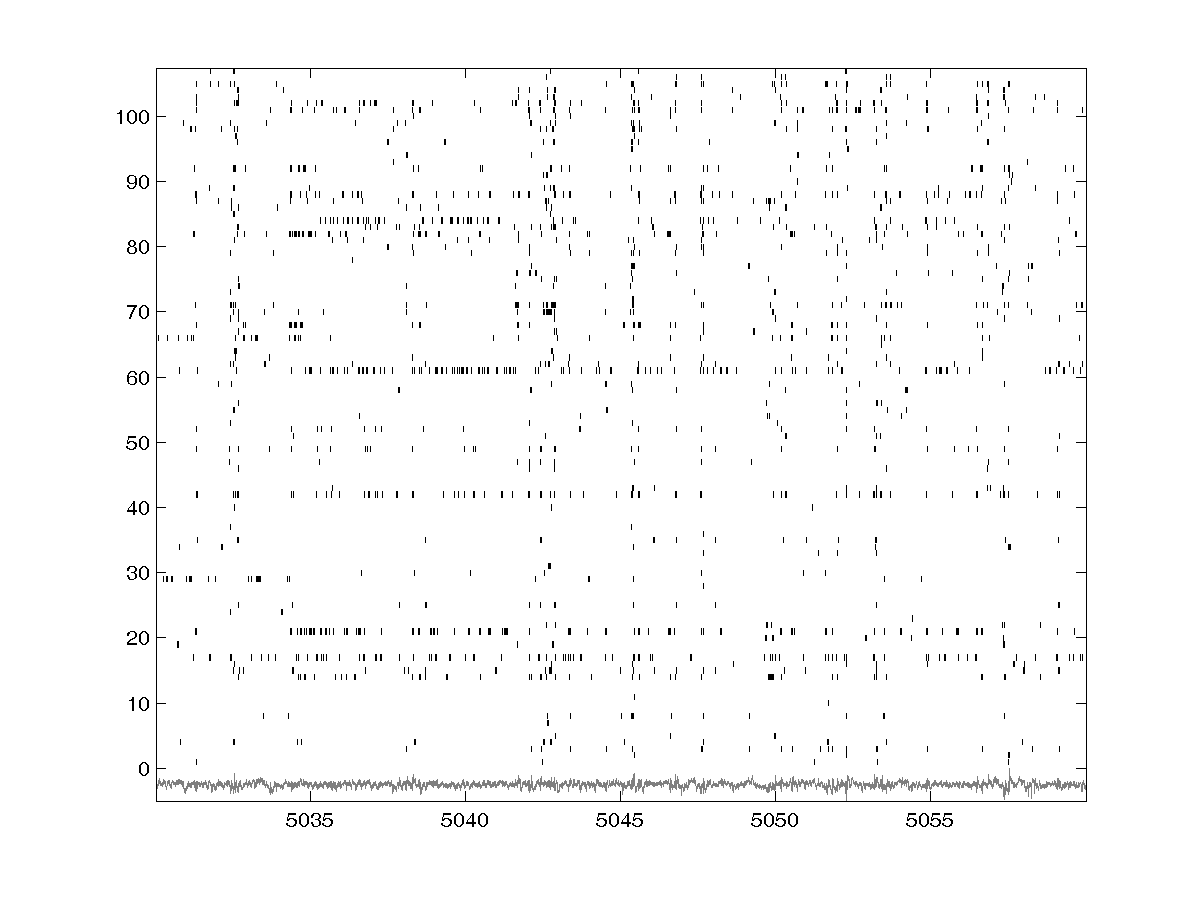 The x-axis shows time in seconds, and the y-axis contains the spikes from our neurons, one per row. The local field potential from one of our electrodes is shown underneath.

This particular segment is taken from a time when the rat was resting on a pedestal. You can see some synchronous activation of a large number of cells showing up as a vertical stripe, for instance around time 5045.4. If you zoom in on this, you will see a fast oscillation in the LFP (“ripple”) occurring at the time of this potential replay event.

Now let's look at a raster from when the rat was running on the track: 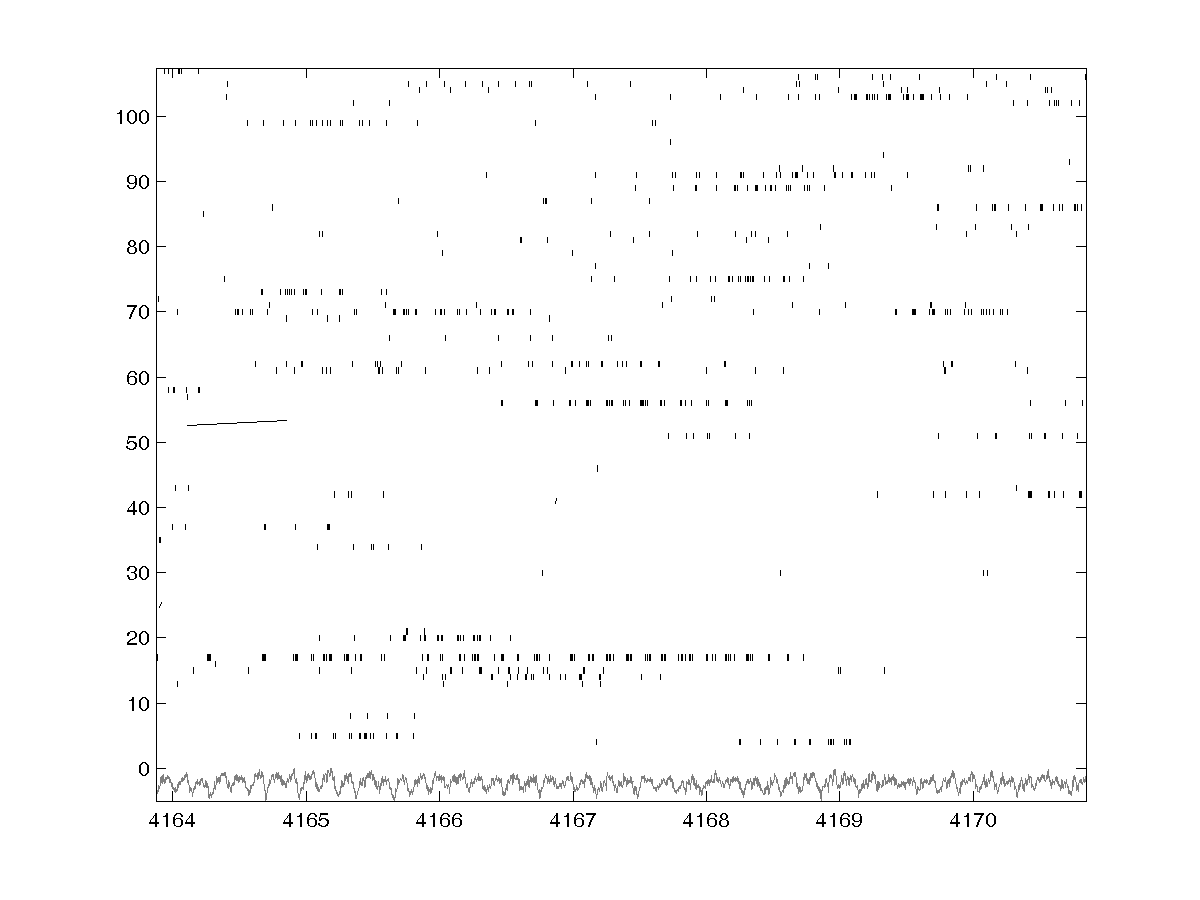 There are some obvious differences with the previous plot, including the presence of a “theta” (~8Hz) oscillation in the LFP, and the rhythmic firing patterns of some neurons (likely “place cells”).

Next, let's get a better view of what the rat was actually doing by plotting the position data, with the spikes from an example neuron on top: 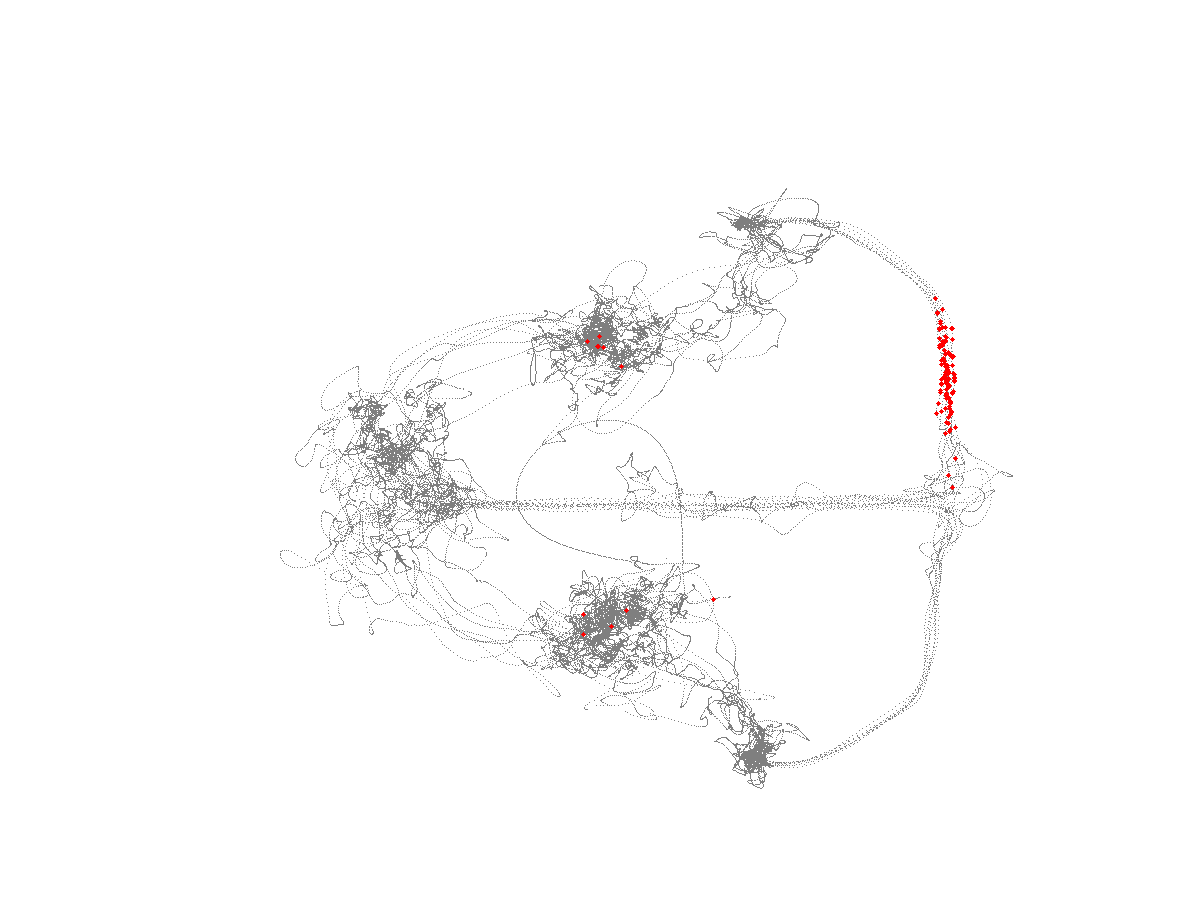 The gray trace is the position tracking data, revealing the outline of the T-maze used. The red dots indicate the location of the rat when this particular neuron fired a spike; most spikes are nicely localized to a particular region on the maze (the cell's “place field”).

Note the use of interp1() above: this is a frequent operation when analyzing spike train data. Those statements essentially say: “for a given set of spike times, get me the best guess (linear interpolation) of the time-varying signal defined by pos.tvec and pos.x”.

This is an example of how the tsd and iv data types are used to detect “sharp wave-ripple complexes” (SWRs) associated with “replay” of place cell sequences:

University of Science and Technology of China https://www.eastjuntai.com/universities/university-of-science-and-technology-of-china.html