An important phrase to remember in any data analysis workflow is “garbage in, garbage out.” Making sure that your input is not garbage starts with a thorough understanding of the recorded signal and how it is stored. (Of course, if you abuse it enough, even the best data can rapidly turn to garbage. But that is beyond the scope of this module, which deals with the raw data.)

Subsampling is common in neural data analysis; for instance, the lab's Amplipex system records data sampled at 20kHz, but for some analyses we are only interested in frequencies in the 1-200Hz range. Thus it would be unnecessarily slow to keep 20kHz data around: at this rate, even a basic 64-channel dataset easily exceeds 6GB in size! So, how do we go about subsampling correctly? This section explores the key issue of aliasing: the appearance of “phantom” low-frequency signals through the subsampling of frequencies above the Nyquist frequency. See the Leis chapter for a thorough discussion of this.

We begin by creating a simple 100Hz signal, sampled at 2kHz:

Say we wish to subsample down to 500Hz to save space. Naively, we might simply take every 4th sample (in fact, this is what the MATLAB function downsample() does):

It's hard to see what is going on when we are so zoomed out. Let's use the axes handles introduced last week to rectify this:

That's better. Notice that in the subsampled plot, you can detect the presence of the 100Hz signal by noticing that each sample repeats (has the same value) every 10ms. However, it doesn't look much like the original – as discussed in the Leis book, we can attempt to reconstruct it:

You should now see this: 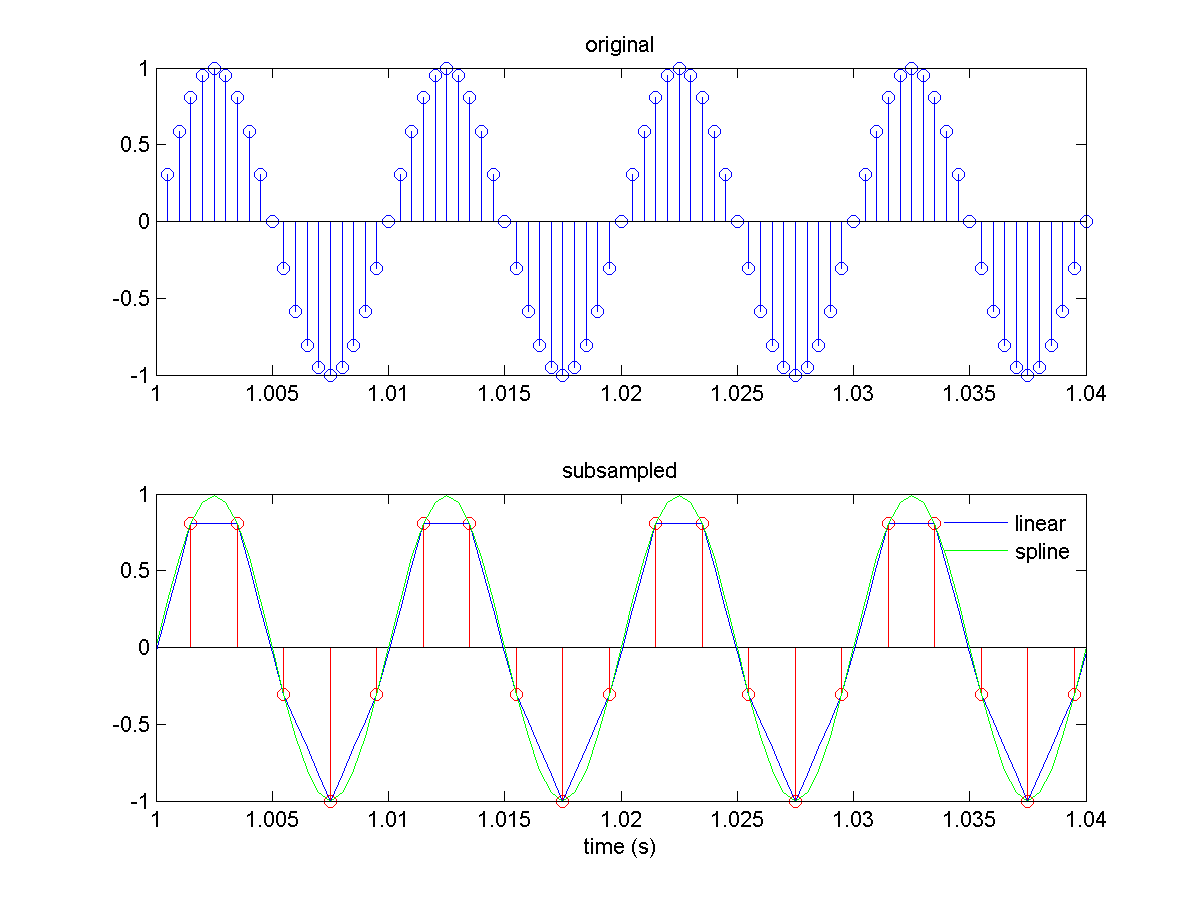 As you can see, the “spline” interpolation method recovers the original signal very well. (Apart from “linear” interpolation, there is also “nearest” which often comes in handy.)

Note also the use of the plot object handles p1 and p2 (which you already know you can use to change line properties; see last week) as inputs to legend() (MATLAB doc page).

Now, suppose we were oblivious to the idea of the Nyquist rate and we attempted to subsample to 200Hz, expecting to see our original 100Hz signal.

☛ Modify the subsampling code above to use a subsample_factor of 10 and plot the result.

You should see the following: 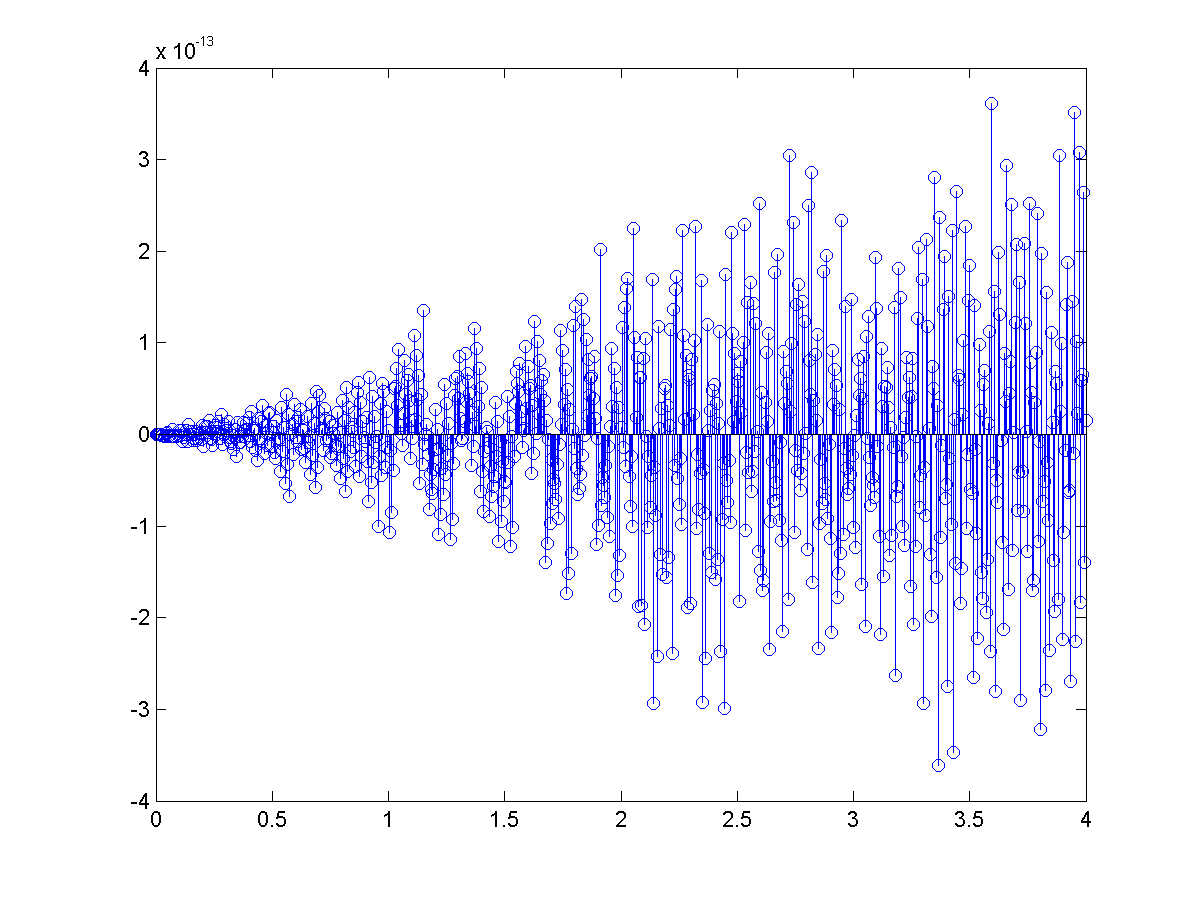 What is going on here? First, it is obvious we are not seeing a 100Hz signal. Second, what are these weird small numbers (note the scale)?

This is actually a consequence of the finite precision MATLAB uses in representing numbers such as pi. It is important to be aware of this, otherwise you may be extremely puzzled:

This page (from Loren on the Art of MATLAB, an excellent blog for MATLAB tips) and the MATLAB docs give the gory details, also discussed in the Leis chapter. For the moment we will not pursue this further and get back to aliasing.

But wait, wasn't the idea that sampling at the Nyquist frequency should be sufficient? Let's try again:

OK, so here is our 100Hz signal, but as illustrated above, we might miss it if we happen to sample at an unlucky phase. Best to not cut it this fine, also for other reasons that will become clear further on in this module. We first wonder, is this even an acceptable way of subsampling, anyway? Let's do another test:

Suppose we are aware of Nyquist, but decide we don't care about this 450Hz component in the signal, so we go ahead and subsample down to 500Hz again: 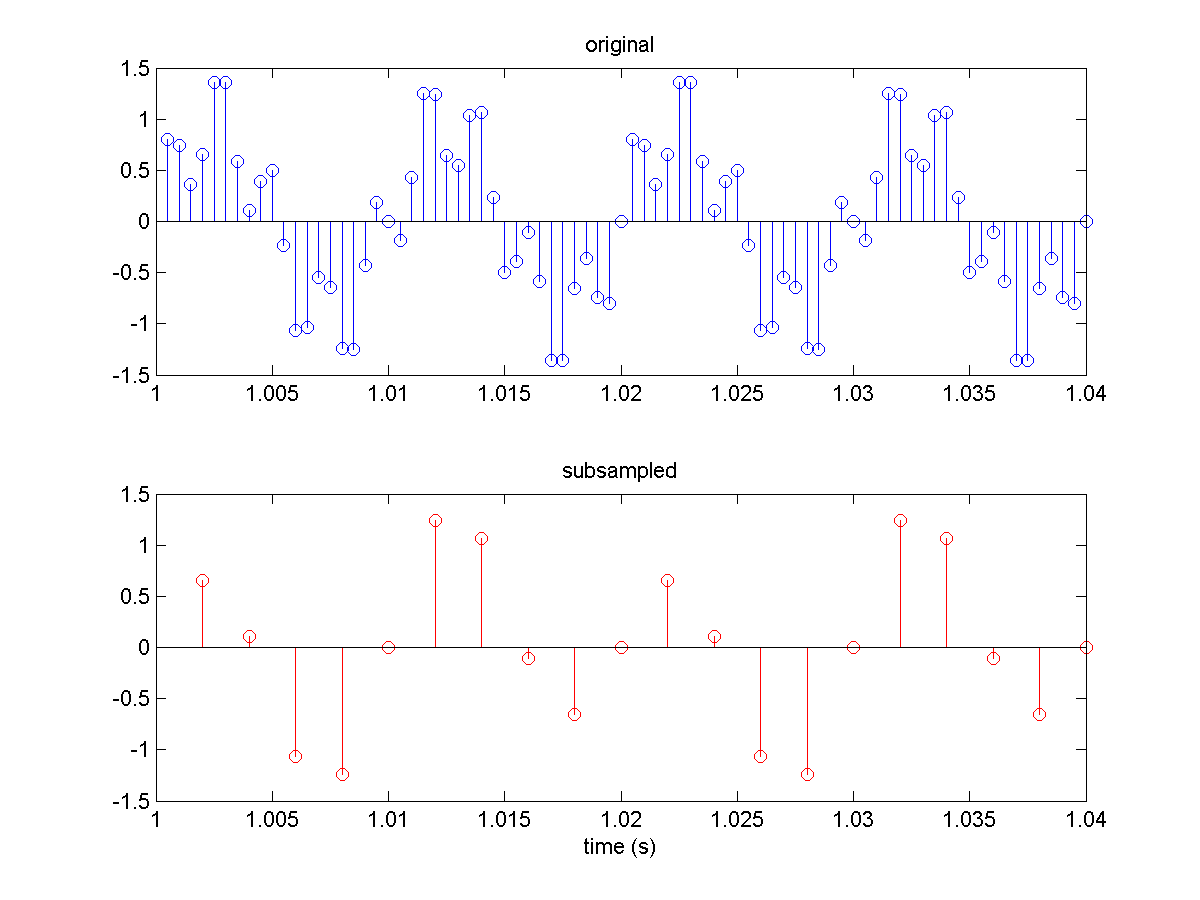 ☛ Inspect the subsampled signal. How does it compare to the previous result where we subsampled the pure 100Hz signal without the 450Hz component?

You should notice some points don't have a 100Hz repeat, so some other components crept in. This is aliasing, and is very dangerous: you might excitedly conclude you discovered a novel slower frequency in your favorite brain region and try to publish a paper about it. Don't do it!

So, what is the correct way? Given that subsampling is such an ubiquitous operation, MATLAB does the hard work for us.

☛ Use the decimate() function to subsample down to 500Hz. Inspect the difference with the incorrect method (in red). What do you notice?

In fact, decimate() first filters out frequency components that may cause aliasing. This is known as an anti-aliasing filter. Always remember to use this, and not downsample() or a variant thereof, when you want to downsample your data.

An idealized (neural) signal consists of samples acquired at exactly the specified sampling frequency, with no gaps or missing data. Real data, unfortunately, does not always meet this specification. This section illustrates some flaws typical for the Neuralynx system that may affect subsequent analysis.

Using the low-level loader to get the raw data

To get into the guts of actual Neuralynx data, we will not use the sanitized wrapper provided by LoadCSC() but instead use the loading function provided by Neuralynx. Using cell mode in a sandbox file as usual, cd into the R016-2012-10-08 data folder you downloaded previously in Week 1. Then deploy the Neuralynx loader:

Note the use of the ~ output argument, which indicates that we do not wish to assign the second output of the Nlx2MatCSC function to a variable.

Most data files come with a “header” that describes some properties of the data. Let's look at the header of our file, which is a LFP recorded from the ventral striatum (nucleus accumbens core) of a rat running back and forth along a linear track:

You should recognize at least a few of the phrases used: for instance, we see that the sampling frequency (often abbreviated as Fs) is given as 2000 (samples per second, or Hz). Important also is the InputRange, given as 1500 (microvolts, uV), to indicate that the maximum value (ADMaxValue, or 32767) in the raw data corresponds to an actual signal magnitude of 1500uV. Ignore the other fields for now.

☛ The waveforms of extracellularly recorded action potentials (“spikes”) typically contain frequency components in the 1000-5000Hz range. Do you expect to find spikes in this data file? Why not?

The ADMaxValue of 32767 reflects the fact that Neuralynx stores data as 16-bit integers (see the discussion in the Leis chapter if this doesn't mean anything to you). Thus, the smallest value it can store is -32768, for a total range of 65536 (16 bits). This means that what is actually a continuous variable – voltage – is stored with finite precision.

☛ Given Neuralynx's 16-bit data format and the specified range of +/- 1500uV for this data session, compute the smallest voltage change (in uV) that can be resolved.

☛ Using this knowledge, convert the Samples variable, which is specified in AD values, to millivolts. (Note that the MATLAB data type is given as double but the values are actually int16.) Notice that the ADBitVolts field in the header can be used for this unit conversion.

Inspect the Timestamps variable. As with the position data in the previous module, this is given in microseconds (us).

You may have noticed that the Samples variable is size [512 x 10761] and Timestamps is [1 x 10761]. As it turns out, Neuralynx data (of the “continuously sampled” type) is stored in blocks of 512 samples. Only the first sample of each block is timestamped.

☛ Compute the total number of samples, and from this number and the sampling frequency, the total time that would be sampled continuously if all samples were acquired without any gaps. Compare this number with the actual time elapsed between the first and last Timestamps. What do you conclude?

In fact, there are several gaps in the data. Standard recording protocol requires a “pre-recording” session, followed by a pause, then the actual recording session, another pause, and a “post-recording” session. This can be seen easily by plotting the difference between each sample and its predecessor (plot(diff(Timestamps))).

We wish to Restrict the data to only those samples taken when the rat was running on the track. Promoted (i.e. preprocessed and annotated) data folders always have an “ExpKeys” file with some useful metadata, including TimeOnTrack and TimeOffTrack values:

In fact this data contains two recording sessions, called 'Value' and 'Risk' respectively (this refers to the distributions of food outcomes predicted by audio cues presented as the rat crossed the center of the track; we will not use this information for now). These sessions map onto the first and second elements of TimeOnTrack and TimeOffTrack, which give the times (in seconds) of when the Value and Risk sessions started and ended, respectively.

☛ Use the first element of ExpKeys.TimeOnTrack and ExpKeys.TimeOffTrack to find the indices of Timestamps corresponding to the Value session. Then, use these to create a new set of variables TimestampsValue, SamplesValue et cetera. (Note that this is essentially what Restrict() does; If you are confused by this, review the documentation on Matrix Indexing.)

☛ Plot the differences between the resulting timestamps. You should see: 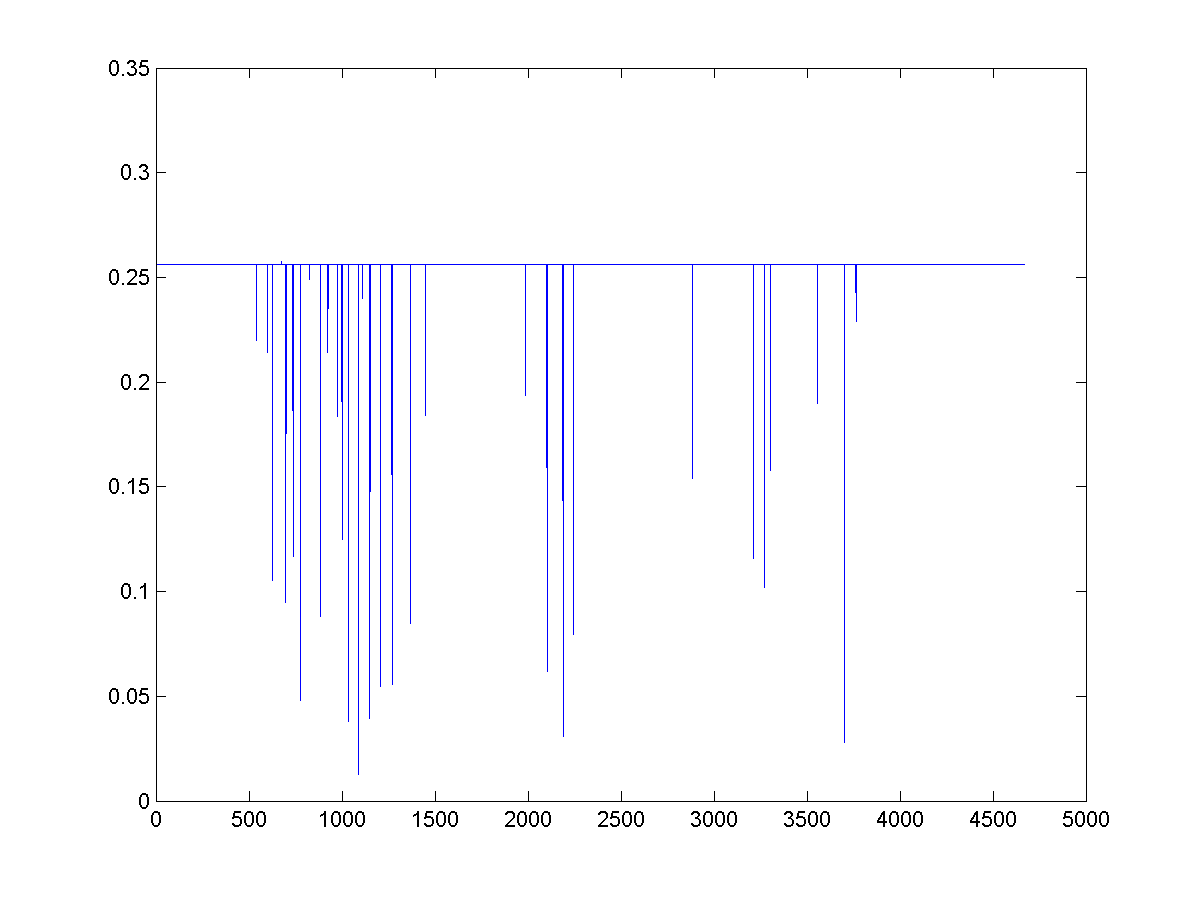 The most common value between timestamps seems to be about 0.26 s. Recall that these timestamps are for the start of a block of 512 values.

☛ What is the expected difference between 512-sample timestamps if Fs is 2kHz?

Let's test if this indeed the most common value in these data:

Hmm. (You can ask MATLAB why, but don't expect an informative answer!)

☛ Use format long to change MATLAB's default display, and inspect the above values to determine the source of the difference.

Apparently the typical elapsed time between two 512-sample blocks does not correspond exactly to what would be expected if Fs equals 2kHz.

☛ Compute Neuralynx's true sampling rate from the observed mode of the timestamp diffs.

However, what is up with these clearly smaller values in the diff plot? Let's investigate:

If you zoom in, you should find that the odd timestamp diffs occur for those sample blocks that have a number of valid samples that is not 512.

☛ Find the indices of these crippled blocks. Look at the Samples inside a few of these to see what Neuralynx does with invalid samples.

Tricky! How would we know to exclude these invalid samples? Fortunately, we can do so using the NumberOfValidSamples variable, which tells us how many are good and can be included. 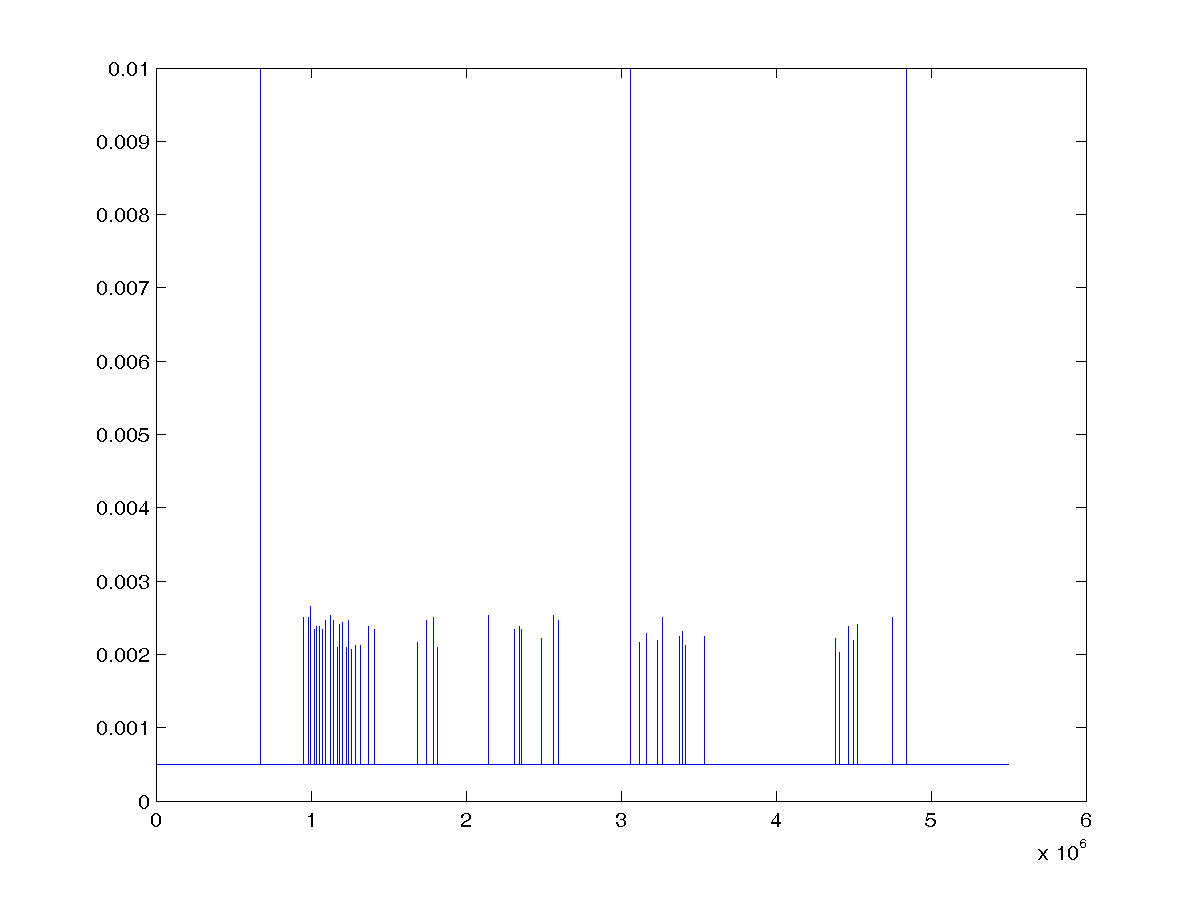 You can see that the most common diff is as expected from the 2kHz sampling rate, but that there are occasional 'skips' with a 4 to 5 times longer diff. (The number of these skips should correspond exactly to the number of bad blocks found; note that there will be three big gaps because of the way the data was collected, as noted above.)

If your data has bad blocks like this, it indicates a problem with the recording machine or its configuration. A good setup should always result in no bad blocks. However, even if there are no bad blocks, Neuralynx Ncs files still allow gaps to result from unclicking Record. As we will see in Module 6, gaps of any kind can be problematic for analysis functions that assume a completely constant sampling rate.

For “Experiments in aliasing”, the first figure showing the original vs subsampled signals is different from what the code produces.

Is this an aspect of aliasing or an artifact of the downsample() or colon [a:b:c] usage? (possibly some idiosyncracy of matlab?)