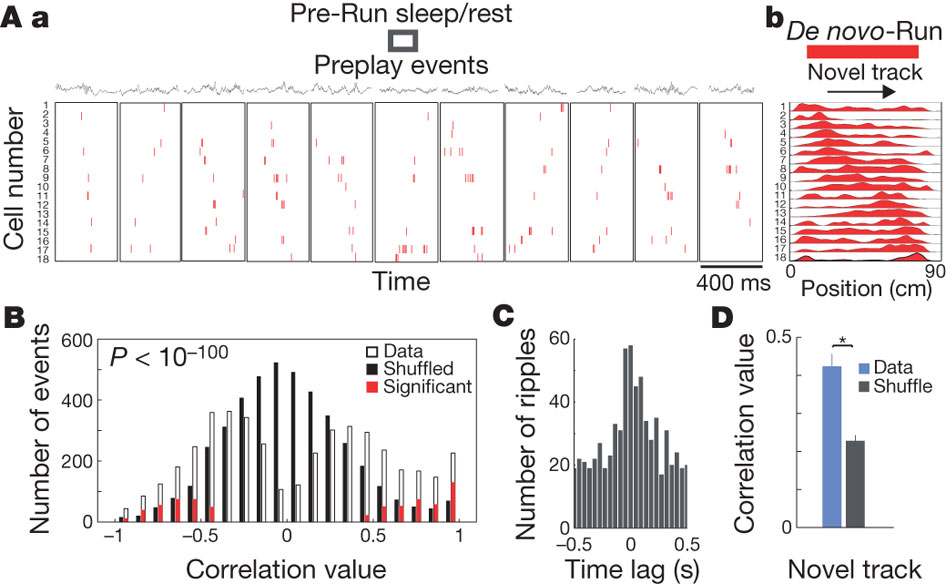 This data set was collected from the dorsal CA1 region of the hippocampus of a rat performing a T-maze task, using a drive with 16 independently movable tetrodes. Spike and LFP data was recorded from each tetrode; possible spike events were detected online and stored for offline spike-sorting, and LFPs were sampled at 2kHz and bandpass filtered between 1-475Hz. (A quirk of this particular data set is that certain time intervals are cut out of the spike data, but not the LFP. So you may notice some odd looking gaps in the rasterplot later.)

Use the shortcut button created in the previous module to set your path. In your project folder, create a folder with today's date and cd to it. This will be your “scratch” working directory with stuff that you don't necessarily intend to push to GitHub.

If you are using your own data that has a missing or bad .clusters file, do this:

This should give a data structure containing spike train data:

csc is the common Neuralynx designation for “continuously sampled channel” and typically is an EEG or LFP type signal sampled and filtered so that high-frequency components such as spikes are not accessible. It is possible to have wide-band, 32kHz CSCs suitable for spike extraction, but these are not included in the current dataset. As discussed in Module 3 a LFP is defined by matching sets of sample timestamps (csc.tvec) and sampled data (csc.data).

You should find that it takes a significant amount of time to plot that many spikes. In practice we often want to plot spikes for specific time intervals.

(Remember to execute the commands below from your sandbox.m file, not from the command line! That way you can more easily retrieve what you did later.)

A MATLAB figure is actually a collection of objects, all with their own properties which you can access and edit. For instance, to change the figure background to black, do

gcf is MATLAB's name for “get current figure”. The above command set its 'Color' property to [0 0 0] which is black (zero red, zero green, zero blue in the RGB world).

Notice that now you can't see the axis lines and labels anymore, because they too became black when you changed the color of the axes. You want to set their color to be white, but you might not know the name of the relevant property.

☛ Use get(gca) to get a list of all the axes properties. Find the properties that correspond to the axes color and set them to white.

Now that our figure looks nice, let's save it as an image file:

Notice that the first argument of print is the current figure. The other arguments specify that we want a PNG file, with 300dpi resolution. PNG format is a good choice for saving figures because it uses lossless compression, JPG images, which use lossy compression, can have ugly artifacts (but more colors). Another useful save format is -dill which saves .ai Illustrator files.

☛ Look at the image file. The colors are all wrong! Solve this problem by turning off the InvertHardCopy property of the figure, and save again. (MATLAB does this by default to facilitate printing images on white paper.)

Let's add some moderately fancy features to our plot. Starting from a currently selected rasterplot, do the following:

A few things to note here:

☛ Change the properties of mua_hdl so that the line is red, dashed, and of width 2.

☛ Use the 'XLim' axes property to zoom in to 5989 to 5990 s; while you are at it, increase the font size to 24. (You can change multiple properties with the same command, just keep adding property-value pairs.)

It would be nice to be able to update what time window of the data we are looking at, without having to type these XLim commands. To do this we need to use a special Figure property, introduced in the next section.

sqr_fn defines a function handle to a so-called anonymous function, i.e. a function that is not in .m file form. The above example basically says “sqr_fn is a function of x, and should return x squared.” (if you don't understand the . notation, it is important to look this up!)

Look at the KeyPressFcn figure property. This property specifies the function to call whenever a key is pressed with the figure active..

☛ Implement the example shown in the page above. Notice the properties of the evt object passed to the keypress function, and that this function also gets passed the handle of the figure that generated the keypress event.

The keypress function thus has access to everything we need to implement some useful navigation functionality.

☛ Create a keypress function that moves the x-limits of the current figure's axes to the left or right by 50% (i.e. if the current axes are from 1 to 2s, then pressing the right arrow key takes it to 1.5-2.5 s. It will be easier to do this with a .m file given the length of what you need to do.

Hint: model your .m file on the template in the example given in the KeyPressFcn section of the Figure properties page, and define it thus: f_hdl = figure('KeyPressFcn',@your_function); if your function is called your_function.m. Please keep in mind of the difference between ”==” and “strcmp” operators. The former treats two strings as vectors and does letter-wise comparison. Thus the two strings ought to be of the same dimension. The latter operator does lexical comparison and returns “1” if the two strings are identical, “0” otherwise.

A standard function definition specifies the exact number of input and output arguments the function expects: function y = sqrt(x) has one input and one output argument. However, it is often useful to have a variable number of input arguments, so that you can override defaults or specify additional options as needed without complicating simple function calls. For instance, you want to be able to make quick plots with plot(x) but specify extra stuff when needed (plot(x,'LineWidth',2)). This is accomplished with the special argument varargin.

Here is the idea:

Note how specifying a “key-value” pair ('b',1) overwrote the default for b. extract_varargin basically goes through the varargins and assigns each value to the corresponding key.

☛ Verify your understanding by calling test_fun such that b and c are both set to 0. Also note what happens when you do test_fun(1,'B',1)!

A different way of flexibly specifying function inputs is through the use of a cfg (configuration) input. An example of how this works can be seen in the getMUA() function used above.

☛ Extend your PlotSpikeRaster function as follows, using either the varargin or cfg strategy, and your knowledge of object handles.

This function should produce a rasterplot of spikes – one neuron per row – with one or multiple LFPs plotted above it, similar to panel Aa of the Dragoi and Tonegawa figure above. The values on the y-axis are not important for now, so you can feel free to hide this axis and rescale everything to look good. Set the default x range to 2 seconds.

Also, we want to be able to overlay events of interest on this plot (such as times when the animal received reward, or brain stimulation was triggered); these can be simple vertical lines that extend all the way through the plot. You can make up a few event times yourself for testing.

Finally, for data exploration it is helpful to be able to skip through the data with the arrow keys; set it up so that the left and right arrows can be used to scroll left and right. For extra awesomeness, add zoom functionality that scales the LFPs when pressing the up and down arrows.

☛ When you are satisfied with your work, save a copy in your project folder and push it to GitHub. Verify that your version is visible from the web.

Everything you need to know to make this work has been introduced in this module: beyond this (and basic MATLAB) no special functions or tricks are needed. A few suggestions: