From very early electrical recordings of the human brain (e.g. Berger, 1929) it has been clear that oscillations are a salient feature of brain activity. The functional relevance, underlying mechanisms and clinical applications of oscillatory activity continue to be active areas of research; all of these endeavours rely critically on accurate characterization and quantification of the data. A fundamental tool in the analysis of oscillations is Fourier analysis, which is introduced in this module.

To study oscillations we require periodic functions of time, such as sin(t), which repeat its values in regular intervals.

Recall that to plot this sort of function in MATLAB, we first define the time axis (commonly a variable with the name tvec), pass this to the function we wish to plot as an argument, and plot the result:

Apart from its frequency (2Hz in the above example), a sinusoid is further characterized by its phase and amplitude, which are readily manipulated as follows:

Sums of sinusoids and harmonic series

What happens if we sum some sinusoids together? A compact representation for this is a harmonic series:

Note that each sinusoid of this series has a frequency that is an integer multiple $n$ of some base frequency $f_0$. This is a compact representation because we only specify the amplitude $a_n$ and phase $\phi_n$ for each of the series, with the frequencies fixed.

Figure 4.7 in the Weeks chapter linked to above is a sum of four sinusoids, with a base frequency of 2:

☛ Why is it not a good idea to use the variable name i? (Hint: for the same reason you should not define a variable named pi…)

It looks like we can create some interesting signals (blue) by summing simple sinusoids (thin red lines)!

In fact, the central insight underlying Fourier analysis is that we can use a sum (series) of sinusoids to approximate any signal to arbitrary precision. An important corollary to this is that any signal can be decomposed into a series of sinusoids. Let's demonstrate this.

Decomposing and reconstructing a signal

We will use the MATLAB function fft() (for Fast Fourier Transform; a technical point discussed in the Weeks chapter is that this in fact computes something called the Discrete Fourier Transform or DFT) to obtain the amplitudes and phases ($a_n$ and $\phi_n$ in the equation above) of a randomly generated signal, and then piece the signal back together by plugging them in to a harmonic series: 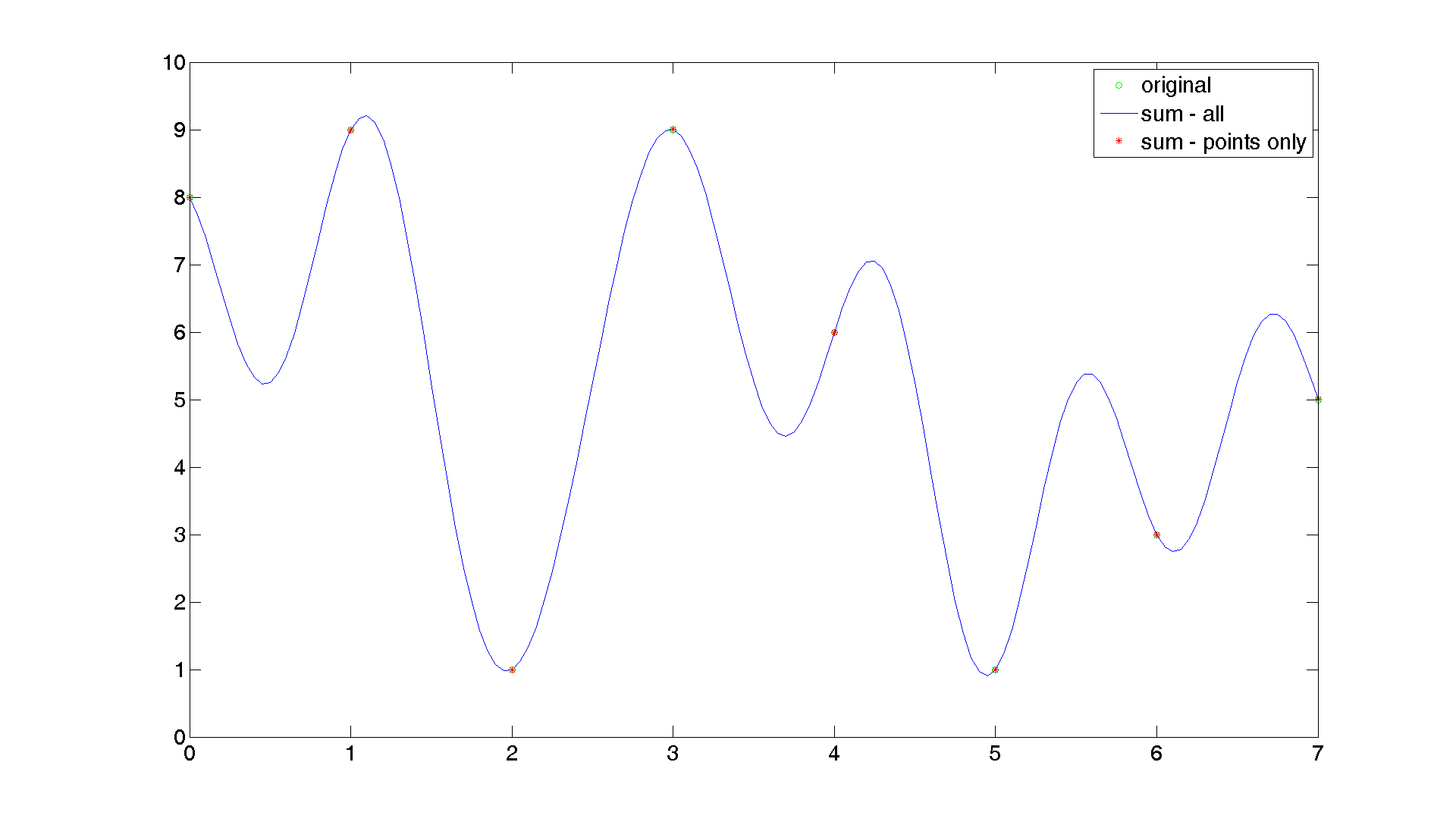 Notice that the reconstruction is essentially perfect. We retrieved the original 8 points by plugging in the coefficients returned by fft() into a series of sinusoids.

You might have noticed the magnitude and phase spectra above have a peculiar form. Let's explore this a little further using a signal with known frequency and phase content: 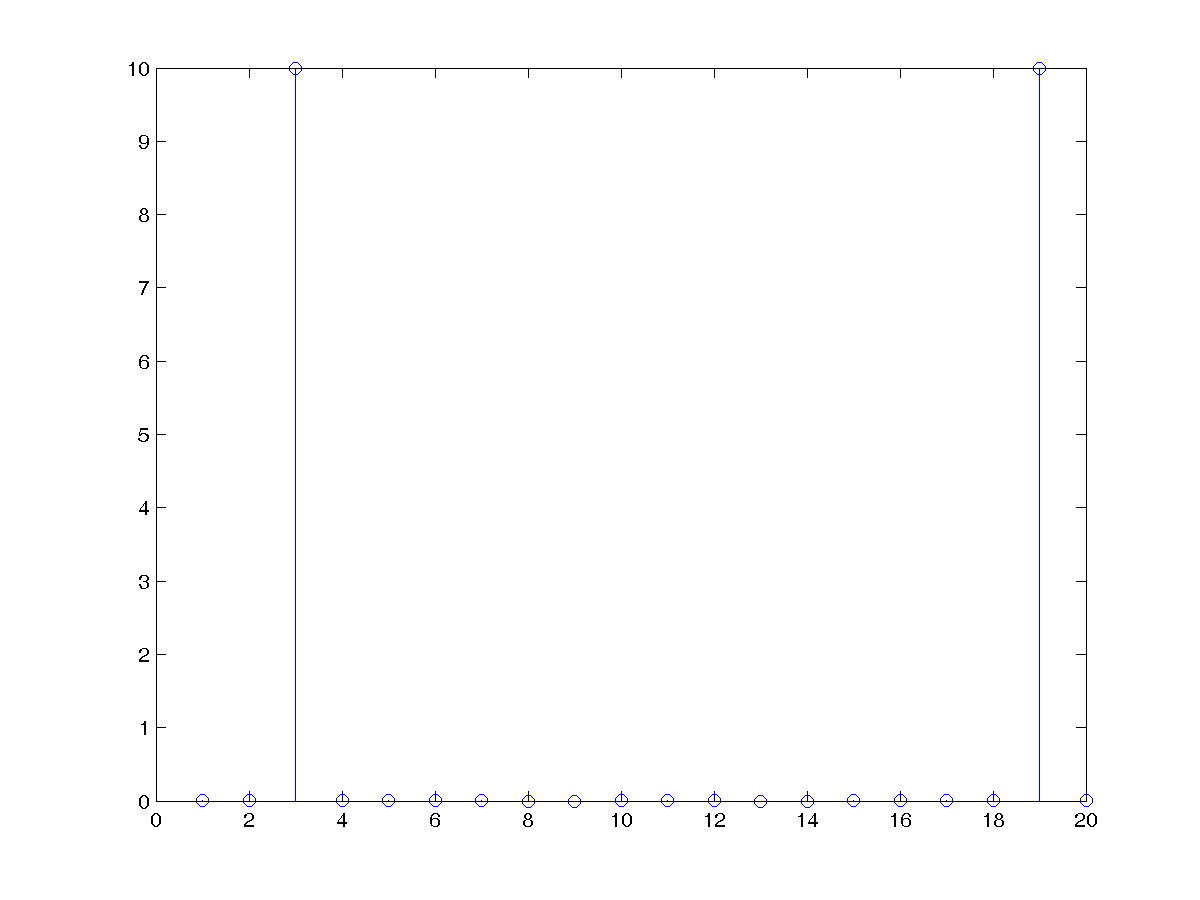 Some issues are apparent:

To understand this, recall from sampling theory that the largest frequency that can be detected in a signal sampled at Fs is Fs/2, the Nyquist frequency. Thus, we would expect the frequency axis from fft() to go from 0 to Fs/2 at most. In addition, it turns out the Fourier transform is defined for real as well as for complex signals, and it returns spectra for both these components. Since we are only interested in real signals, we get a symmetric spectrum back (note that if we did not use abs() on the output of fft() we would get some imaginary components as well).

To construct a frequency axis that takes both these ideas into account, we can do:

fftshift() cuts the second (complex) half of the spectrum and pastes it backwards at the beginning, so that our frequency axis is now correct; it is in units of 1 / Fs so 0.1 corresponds to the 2Hz we put in.

For analysis purposes we don't care about the complex part of the spectrum, and this is usually ignored to yield what is referred to as the “single-sided spectrum”. Because we would never actually use fft() directly to estimate spectral content (see the section on spectral estimation below) we won't do more work to get rid of it now.

A final point about the output of fft() is that it contains the magnitude spectrum at specific frequencies. For instance, we have the 0.1*Fs point, but not 0.125*Fs! This will become important later.

The above example was constructed nicely so that our signal contained exactly two full periods. This will not be true for real world signals. What happens if we don't have this perfect input?

☛ Change the tvec variable above to contain one more sample, like so:

This means that our signal is now no longer an integer number of periods. The resulting two-sided spectrum is:

To explain (1), recall that fft() evaluates the magnitudes of specific frequencies only. Inspection of the spectrum above indicates that we don't have a frequency bin that is exactly 0.1 (the true frequency of our signal). Let's fix that using the second, optional, argument of fft().

As we increase the number of points to evaluate the FFT over, we get increased frequency resolution, and indeed the peaks of the spectrum converge to 0.1 as expected. Under the hood, this is in fact accomplished by padding the input signal with zeros before the DFT is computed; doing this does not change the spectral content (the zeros are not periodic), but allows a much longer harmonic series, with a smaller fundamental frequency, to be evaluated.

A typical value to use for the number of points to evaluate the FFT is the next power of 2 (after however many samples your signal contains). This is because part of what makes the FFT fast is that it can easily divide the signal in half. But non-power of 2 values also work.

☛ What happens if you try to evaluate the FFT using a number of points smaller than that in your signal?

As we increase the number of points to evaluate the FFT, we can obtain coefficients for frequencies of arbitrary precision. For this reason, the power spectrum is often referred to as power spectral density or PSD.

☛ Demonstrate that you get the same effect by zero-padding the original 21-point signal (rather than making the signal longer, as in the above example).

It is clear from the above figure that even if we increase the frequency resolution of our FFT with zero-padding, we still have an imperfect estimate of the true frequency content of our signal. In particular, the estimate around the true frequency has a nonzero width – this part of the magnitude spectrum is referred to as the main lobe – and we have nonzero spectral content for other frequencies as well (the side lobes).

To explore the source of this spectral leakage, let's make our signal longer while evaluating the FFT over the same number of points: 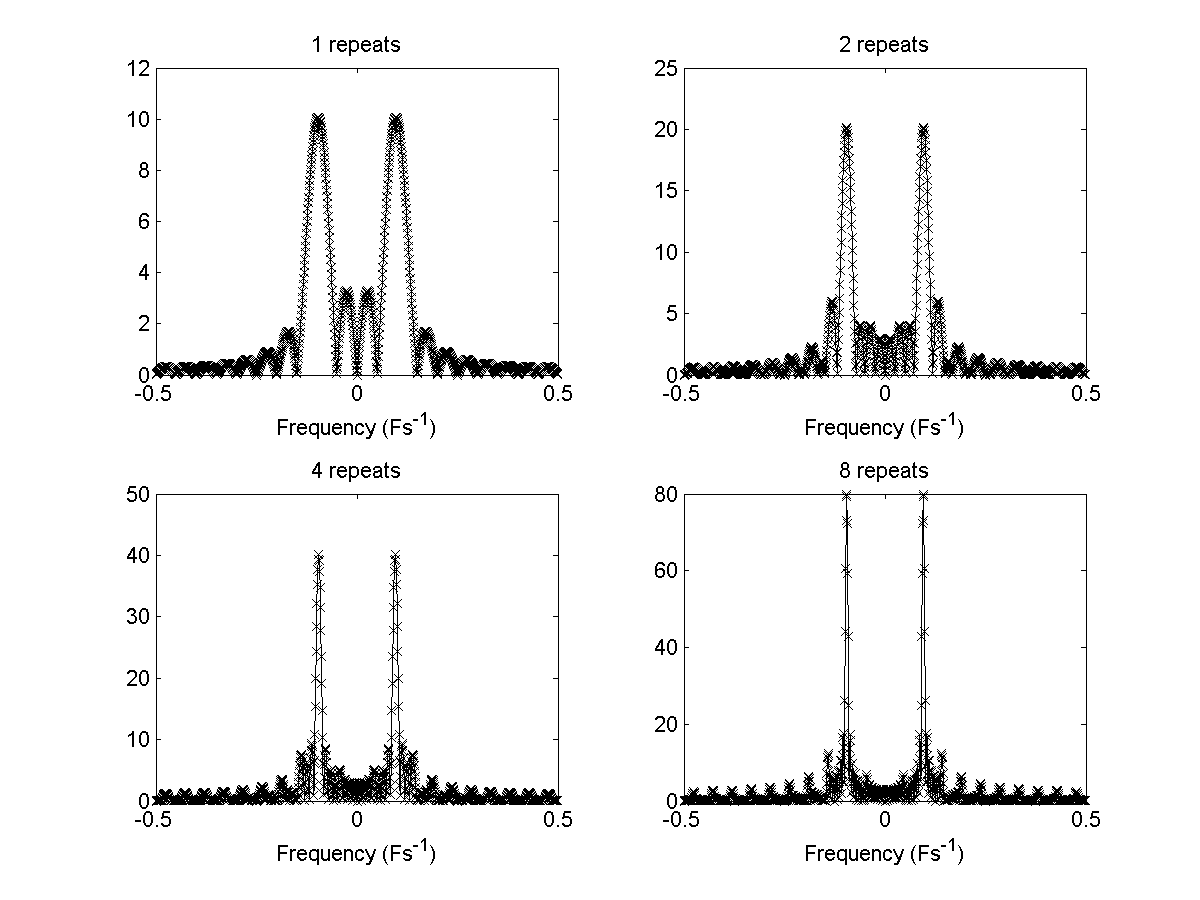 Notice that the magnitude spectrum converges to the true frequency as we increase the length of the signal. However, for any signal of finite length, there will always be some spectral leakage. This occurs because we are effectively cutting off the signal abruptly; other than changing the length of the signal (which is not always an option) we can attempt to minimize spectral leakage through using less abrupt cutoffs, discussed in the next section.

Computing a FFT over a window of finite size is as if we are taking a finite-size window (for instance w(n) = 1 if 0 ⇐ n ⇐ N; 0 otherwise; note that this defines a rectangular window) and multiplying this with a hypothetical infinite signal.

It turns out that the spectrum of the windowed signal equals the convolution of the signal's spectrum and the window's spectrum; this occurs because of the convolution theorem that states that multiplication in the time domain equals convolution in the frequency domain. (If the idea of convolution is new to you, you can think of it as a kind of “blurring”: for instance, convolving a signal with a 5-point rectangular pulse is equivalent to taking the running average with a 5-point moving window. For a graphical exploration of this idea, see this website or look at the MATLAB doc for the conv() function.)

Thus, it becomes important to understand the spectral properties of the windows used for Fourier analysis. Let's plot a few:

☛ What does the eval() statement in the above code do? 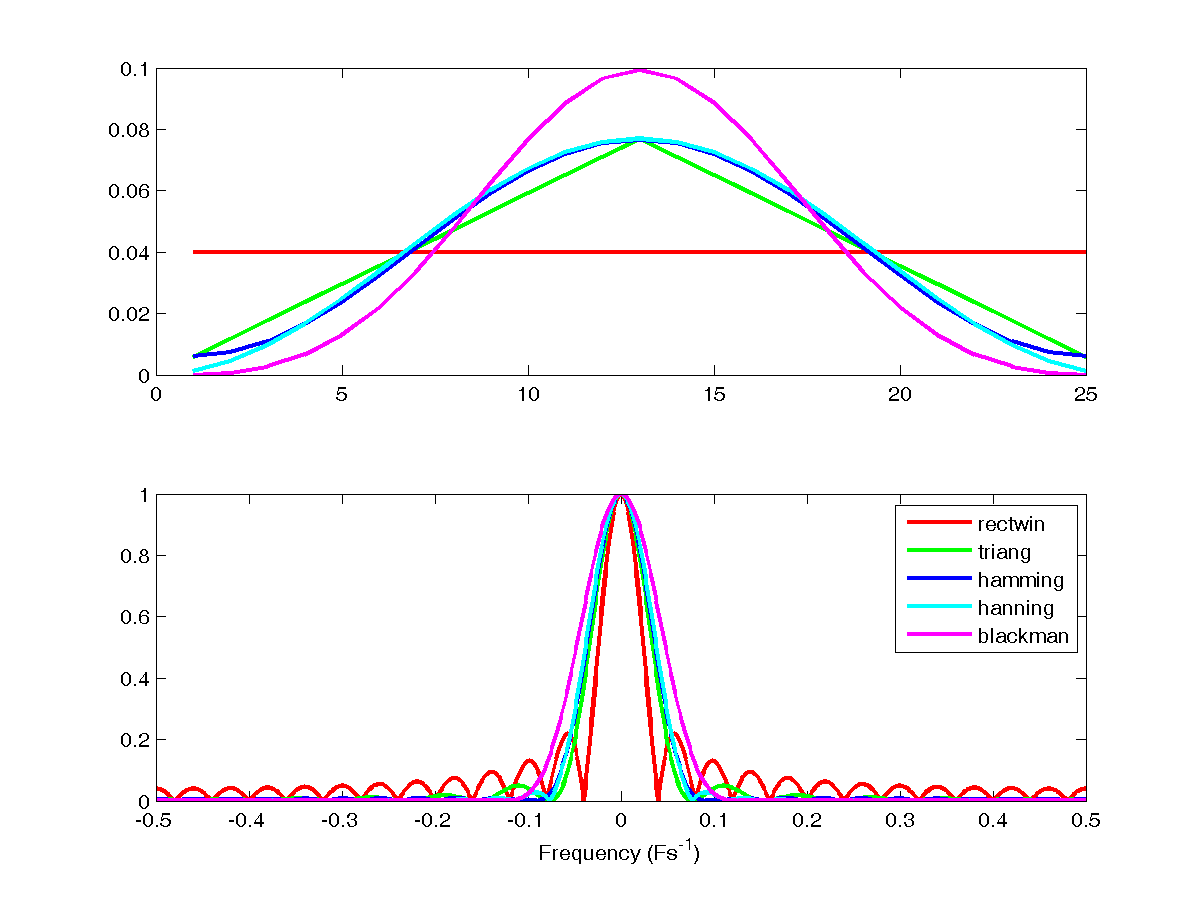 Inspection of the magnitude spectra of the different windows shows that although the rectangular window has the narrowest mainlobe (a desirable characteristic; narrower means a better estimate of the true underlying frequency) it also has the largest sidelobes (an undesirable characteristic; these sidelobe frequencies are not actually present in the signal!). As you can see, different windows represent different tradeoffs between these properties.

☛ Change the y axis to log scale to better visualize the differences (recall that you can use get(gca) to access the properties of the current axes).

☛ Modify the code in the Spectral Leakage section, above, to use a Hamming window instead of a rectangular window. Verify that the sidelobes are now smaller, at the expense of a slightly wider mainlobe.

Note that the integral of the windows should be 1, to preserve power estimates, as guaranteed by the normalization statement in the code above.

The above method of spectral estimation, obtaining the Fourier coefficients by applying the DFT to the entire data set, is also referred to as constructing a periodogram. MATLAB has a function for this:

Note that this plots the one-sided spectrum, and that the units on the frequency axis are now in Hz. In addition, rather than plotting the magnitudes of the sinusoid components as before, we now have power, which is simply the magnitude squared.

It is easy to change the window:

Note again the trading off of mainlobe width against sidelobe magnitude.

It turns out that the periodogram, although usable, is not a very good spectral estimator in some ways; it is biased: its variance does not tend to zero as data length goes to infinity (details). This makes later statistical comparisons difficult, and the spectrum look noisy, as we'll demonstrate in a later section.

A useful approach to address these issues is to cut the signal up into smaller segments, estimate the spectrum for each segment, and combine the estimates, a process known as Bartlett's method. An example of a spectral estimator that uses this approach is Welch's method, which uses segments (or windows) that can overlap.

Type help pwelch and read the overall description of what this function does. Based on the discussion above, this should make sense.

Here is an illustration of how pwelch() performs:

Note that the Welch spectrum sacrifices some frequency resolution, because of the smaller window that results from cutting up the data, but our estimate is now more robust.

As in the previous module, let's load some Emotiv data:

We also need to define a few things: our sampling frequency Fs, and which channel we want to plot. Pick one and assign it to the iCh variable.

Now we can compute the spectrum:

Note that we are plotting not the raw power spectrum but rather the 10*log10() of it; this is a convention similar to that of the definition of the decibel (dB), the unit of signal power also applied to sound waves.

Regardless, it doesn't look very good! The estimates look very noisy, a characteristic of the periodogram method.

☛ Edit the above code to compute a Welch spectrum instead, using a Hamming window of the same size and 50% overlap. Much better!

☛ Compute the PSD of “white noise”, i.e. a random signal where each sample is drawn independently from the interval (0,1) with equal probability. Is it 1/f? How would you describe its shape? Hint: use the MATLAB function rand().

Borsa per cellulare in pelle a tracolla con due uccelli. borsa in pelle con cinturino regolabile, 2020/09/16 15:33

Fold Up Wheelchairs For Sale https://www.jbh-medical.com/fold-up-wheelchairs-for-sale/

Fold Up Wheelchairs For Sale https://www.jbh-medical.com/fold-up-wheelchairs-for-sale/